We know profoundly little about the oceans; nevertheless, it does not mean that studying oceans is not important. From following the migrations of marine creatures to climate control of the entire continents to tracking pollution spread in the area, one way of learning about our planet’s resources is to use technology. An example of using technology for underwater exploration is a project that my guest, Dr. Curt Schurgers, has been working on for several years now. In this week’s article, you will learn why we need to study ocean currents? What are some of the challenges facing underwater exploration? How does the technology of communicating underwater work? And much more. 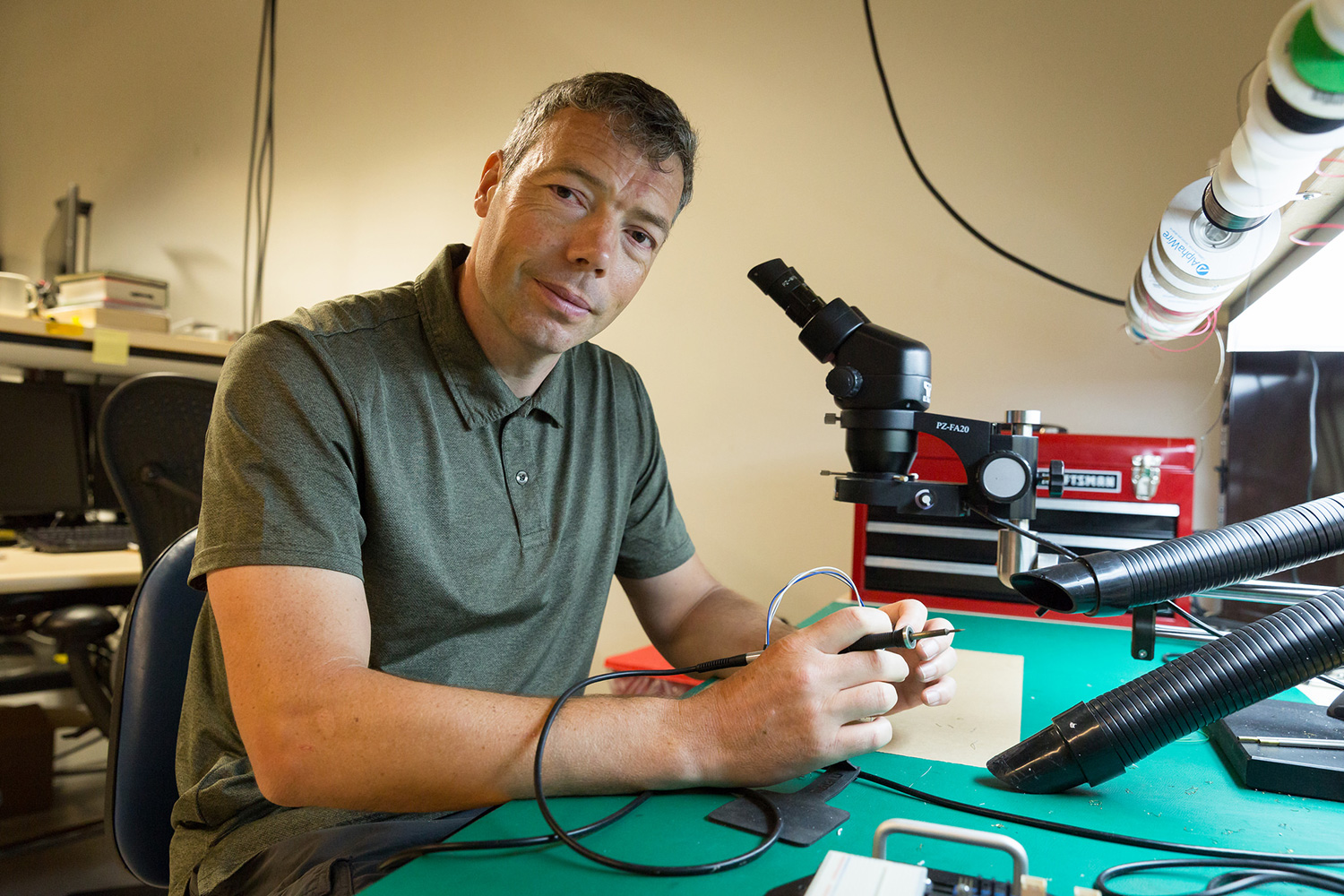 Curt Schurgers received his Ph.D. from UCLA in integrated circuits and systems in 2002, and his MS in EE from the Katholieke Universiteit Leuven, Belgium (KUL).  Before coming to UCSD in 2003, he was a postdoctoral associate at MIT. Dr. Schurgers is currently a Teaching Professor at UCSD, focusing on teaching methodologies and hands-on learning. The project that Dr. Schurgers has discussed in this article involves a collective of autonomous underwater devices that float with the undersea currents. By using sound, these vehicles create a network to track their location while underwater.

Why is it important to study ocean currents?

Oceans cover more than 70% of the Earth’s surface, 35% of the seafloor has been mapped, and only 5% of the oceans have been researched overall. In particular, this article is focused on the effects that ocean currents have on our planet and the technology that allows us to study the currents.

Large currents are vast masses of water that move in varying patterns on the surface of the water as well as deep within the water. Studying ocean currents is important for different purposes. Some ocean currents act much like a conveyor belt, transporting warm water and precipitation from the equator toward the poles and cold water from the poles back to the tropics. Thus, ocean currents can regulate global climate, helping to counteract the uneven distribution of solar radiation reaching Earth’s surface. Tracking local currents, on the other hand, can help minimize the spread of pollution in the area because of the flow of the water, and thus pollutants will be known. Another application of studying ocean currents relates to marine biology. Larva of marine creatures rely heavily on ocean currents: small larva cannot swill as efficiently as grown species and thus use underwater currents to navigate and travel. Researching underwater currents can give an insight into how the larva will travel and could help the researchers understand how to best protect them[1].

What are the scientific challenges concerning underwater exploration?

There are a lot of challenges that scientists face when creating underwater robots. First, water is a corrosive, reductive fluid. That is why all the mechanisms and electronics have to be waterproof. Second, the deeper a robot needs to submerge, the higher the pressures it has to withstand. In addition, there is no existing infrastructure underwater, meaning that you need to carry a power source and cannot rely on existing infrastructure.

The most difficult challenge, however, is that visible light, or electromagnetic waves overall, do not penetrate water the same as they do with air. Light and radio signals require much more energy to travel the same distance underwater. Thus, all the regular communication and tracking technologies with satellites and GPS could not be achieved underwater. The method that was used in the project discussed in this article uses sound to communicate underwater. This is a great solution for the underwater environment because sound travels faster underwater than in the air, it does not need a lot of power to travel relatively long distances compared to other types of communication. Nevertheless, there are still limitations and challenges related to sound communication underwater.

Why use a network to capture underwater currents?

Different problems require different solutions. That is why it is most reasonable to discuss the reasons for using an underwater network of autonomously drifting devices only after understanding the applications of the project. In particular, the project that Dr. Schurgers was working on was focusing on tracking underwater currents. There are different approaches to accomplishing this. For example, some projects use a floating device that has a bag connected to it that moves with the current. However, the problem with this design is that it is almost impossible to get a 3D mapping of the current because the floating device only moves in one plane – the water level.

The advantage of using devices that can float at a depth they choose is that researchers get a 3D movement of the currents.

The trajectories of the devices once they had reached the target depth of 10 m. Each trajectory is colored according to the time since deployment. You can see the live formation of the graph by following the link. (Nature, January 24, 2017, “A swarm of autonomous miniature underwater robot drifters for exploring submesoscale ocean dynamics”)

How does the system work?

The most challenging part of the system is the establishment of the network that allows devices to record their position and communicate it to the main center to research the currents more or less remotely. The way it is done in the project, and the area that Dr. Schurgers was focusing on, is by creating a communication network between underwater devices and surface devices using sound.

(a) The in-depth drone in the ocean at an approximate depth of 3 m. (b) The floating pinger of the GPS-localized spar buoy with a 30 cm ruler at the base for scale. (Nature, January 24, 2017, “A swarm of autonomous miniature underwater robot drifters for exploring submesoscale ocean dynamics”)

The underwater devices have a pressure sensor that can check the pressure of the water and from that information estimate their depth. Then, the devices communicate this data to the surface float which then communicates this data to the research center using regular satellites. This, of course, is an oversimplified version of the system and there are a lot of nuances of establishing communication and determining the actual location of the devices. There are also still technologies that plan on being implemented.

If you want to learn more about this project and listen to the interview with Dr. Curt Schurgers, check out the following link.

The ocean is vast and fascinating, there is a lot of work yet to be done and discoveries yet to be made. We live in a time where anything is possible and we are limited only by our imagination and willingness to create. So, invent, create, explore, and dream.

“How does the ocean affect climate and weather on land?” Ocean Explorer, November 13, 2021

Did you enjoy this article?

Eduard is a freshman at University of California San Diego. He enjoys engineering, math, solving Rubick’s cubes, swimming, and, strangely enough, collecting coins. Send him a question or suggestion at eduard@sciteens.org.

More on this topic...

Perhaps you may have heard someone say at one point “I am at risk for ___ cancer, so I have to take extra precautions…”. Or, you may have heard the claim that “Sunscreen can reduce your risk of getting skin cancer”. Two questions consequently arise: first, how do we actually know of cancer risk; second, what does it mean to be at risk? To start we have to look at our cells’ DNA and what can happen if it becomes mutated.

It’s almost the end of the school year, and we can all agree that everyone is anxiously trying to figure out what they want to pursue as a future major for the next couple of years and which college they should choose. Nevertheless, they shouldn't decide that whilst having little knowledge and experience. Lucky for you, this guide is here to help you.

Introducing our new speaker series only at Sciteens! Starting off the series we have Jana Al Hinnawi and her experience as a biomedical engineering major.

Anxiety. It isn’t tangible but can overwhelm someone to the point of seeming so. The dictionary definition is: “a feeling of worry, nervousness, or unease, typically about an imminent event or something with an uncertain outcome.” This feeling can transform from an internal feeling to something with an external presence easily. However, there are ways to dissuade these negative emotional sensations. Learn more in this week's article!

What would you say if I told you falling in love was more than just grand, romantic gestures and butterflies in your stomach but rather microscopic molecules altering your brain chemistry?