I bet you didn’t know that over 75% of statistics are made up. Hopefully, you don’t take our word on that statistic, but we do hope you take our word on when and how to use statistical tests within your research. After all, numbers don’t lie (except for our own made-up statistic). Having the ability to conduct and interpret the results of statistical tests will allow you to set yourself apart from your peers when it comes to the science fair or research conferences, so let’s get started towards an overview of these great tests.

What are Statistical Tests?

Statistical tests are tests used by scientists in order to make inferences about data. These tests will allow you to numerically prove the significance of your findings. These tests range from proving a correlation between two variables to how much the means of two similar populations differ. Whereas more rudimentary statistics such as the mean, median, and mode allow you to explain your data at a glance, statistical tests will allow you to examine the importance and validity of the results of your experiment

When Should I Use Statistical Tests?

Wow, that was all a mouthful. There’s nothing quite like being thrown a million new stats terms in two paragraphs, huh? It’s okay if you’re a bit overwhelmed by all of this, and if you need to explore this information in a bit more detail, we recommend you check out the sources that we’ve provided below. Without further ado, we’ll explain how to get to work using different statistical tests to either reject or fail to reject your H0. Please note that we randomly generated the data below.

Possibly the simplest to understand, a regression allows us to examine the relationship between an independent and a dependent variable. The simplest form of regression is the aptly named Simple Linear Regression. This type of regression looks to see if there is a linear relationship between two variables. For example, we could perform a research project that explores the number of hours spent binging Netflix the night before a test, and the resulting test score obtained the next day for a sample population. We may find that for every additional hour spent watching Netflix, our research subjects drop 10 points in their test score. This is a linear relationship, and performing a Simple Linear Regression would allow us to see if there is in fact a significant relationship between the independent variable (number of hours watching Netflix) and the dependent variable (test score the next day). If we receive a p-value of less than or equal to 0.05, we can safely reject our Null Hypothesis that there is no relationship between the number of hours spent watching Netflix the night before an exam and the resulting test score.

In research, you’ll likely find many cases where there isn’t a linear relationship between data. Not to fear, you can instead use different forms of regression. The easiest way to determine what type of regression to use for your data is to plot your data (we discuss here how to make figures if you’re unsure of the best practices of doing so). Once you can visualize your data, it’s easy to determine whether you should use a Linear Regression, a Logarithmic Regression, an Exponential Regression, or any other type of applicable regression.

Next, we’ll discuss how to test for a correlation between two variables. The correlation between two variables is simply how related those two variables are. A common form of correlation testing is the Chi-Square Test of Independence. This simply measures the strength of the association of two categorical variables. For example, our study could try and measure whether there is a significant difference between the study times of men and women. We could classify our test subjects into four different groups: Whether they study in the morning or in the afternoon, and whether they are male and female. If we perform a Chi-Squared Test of Independence between the two tests and receive a p-value less than or equal to 0.05, we may conclude that there is a significant difference between the study preferences of men and women. For more tips on how to conduct a Chi-Squared Test of Independence, check out the links below.

Another very common test is a comparison of means test. This examines how the average value of two variables compare. A common form of means testing is a T-Test. The two most common types of T-Tests are the Paired T-Test and the Independent T-Test. 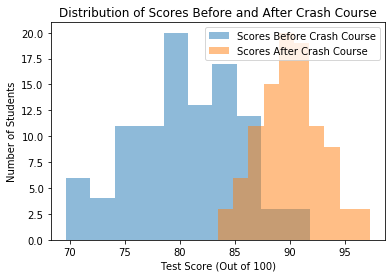 Statistical testing allows us to determine the significance of the results we obtained through experimentation. We start with a Null Hypothesis and then determine whether we fail to reject or reject the Null Hypothesis based on the p-value we obtain from statistical testing. Some of the most common forms of statistical tests are regressions, correlation tests, and comparison of means tests. The ability to conduct such tests will set your science fair or research project from the rest, and will thoroughly impress judges and readers.

When to use each statistical test:

Video on performing a Chi-Square test:

Video on conducting a two-sample T-Test:

Did you enjoy this article?

More on this topic...

Perhaps you may have heard someone say at one point “I am at risk for ___ cancer, so I have to take extra precautions…”. Or, you may have heard the claim that “Sunscreen can reduce your risk of getting skin cancer”. Two questions consequently arise: first, how do we actually know of cancer risk; second, what does it mean to be at risk? To start we have to look at our cells’ DNA and what can happen if it becomes mutated.

It’s almost the end of the school year, and we can all agree that everyone is anxiously trying to figure out what they want to pursue as a future major for the next couple of years and which college they should choose. Nevertheless, they shouldn't decide that whilst having little knowledge and experience. Lucky for you, this guide is here to help you.

Introducing our new speaker series only at Sciteens! Starting off the series we have Jana Al Hinnawi and her experience as a biomedical engineering major.

Anxiety. It isn’t tangible but can overwhelm someone to the point of seeming so. The dictionary definition is: “a feeling of worry, nervousness, or unease, typically about an imminent event or something with an uncertain outcome.” This feeling can transform from an internal feeling to something with an external presence easily. However, there are ways to dissuade these negative emotional sensations. Learn more in this week's article!

What would you say if I told you falling in love was more than just grand, romantic gestures and butterflies in your stomach but rather microscopic molecules altering your brain chemistry?